The flags flew, Stars and Bars, in a sloppy parade of pickups thirty strong amid the stop and go rumble of Saturday traffic, past the Bojangles where we sat in an orange booth, eating second-rate chicken.

For the past year, we’d held the fried chicken meal we’d eaten at The Clock of Brevard as the

gold standard of all those we’d tried since. We’d driven an hour for the stuff, as excited about the sliced beefsteak tomatoes and tart slaw as we were about the dark meat dinner itself, and the GPS dutifully led us, after a full twelve months of anticipation, to what turned out to be a shell of a building, the old Clock sign gone, save for the now-hollow promise of “fried chicken,” the parking lot overgrown and empty.

While Brevardians may have been deprived of The Clock—a restaurant once so successful, according to the newspaper, it had run the local KFC out of town—they certainly were not deprived of fried chicken. Next door sat a brand-new Bojangles. Across the street, another chicken chain, Zaxby’s. New buildings, full parking lots, familiar names, familiar food. And, giving in to the annoying default of American life—we were hungry, we were expecting to eat fried chicken, it was right there—we went in, ordered our food, and sat in a booth overlooking the commercial strip mall hub of downtown Brevard. In a booth next to us, two black women in army fatigues—soldiers—ate lunch.

As we launched into our chicken, I spotted the first truck zip past. Luke missed it, but then another few came along, in arrogant

Image taken from www. wtsp. com of a similar parade/rally earlier this year.

clusters, driving just above the speed limit to keep the flags flying and unmistakable. They flew the Stars and Bars alongside Old Glory, or an occasional coiled “Don’t Tread on Me” snake in a gaudy electric yellow. They’d fashioned flagpoles off the end of their pickup beds, and let their heritage of hatred fly, as they drove down the street in groups of three and four. The soldiers next to us glanced out the window the same time as we did, then immediately turned their attention back to their chicken, as though they never saw it. If they had anything to say about the parade, it was out of our earshot. But we snarled and gnashed and shook our heads, pointing out between bites, as we clutched chicken with greasy fingers, another Dixie truck sailing past, and bitched about redneck assholes.

“At least when they fly the flag,” Luke said, “you know who these sons of bitches are.”

But who are they, exactly? Who was it that decided, on the day after the flag was lowered at the state capital of South Carolina, to organize and hold a truck rally for the confederacy? In the flow of cars moving past our window, how many people supported them? How many reacted with rage, indifference, pride? How can you show it? What would that flag look like? Every time another confederate cluster drove by, I wanted to turn to the soldiers, in a gesture of solidarity and outrage, and let them know that they had allies among them, there in the Bojangles. After all, how many hours had they spent training on their bellies, clutching rifles under barbed wire, standing in formation, shoes shined, saluting the flag, pledging allegiance, preparing for a war that never needed to happen? What kind of sacrifice had they made for themselves, for their families? How did a lack of educational infrastructure make the military seem like a good idea, a viable option in a winnowing field?

At some point, in another window side booth, two young black teenage boys sat down with their trays, and I glanced at them from time to time as the flag-bearing trucks roared past, anxious and wanting to protect them, curious to see if they’d notice. They seemed more interested in their cell phones and chicken. A few minutes later, a third teenager, a white boy, joined the table and the three of them sat together as teenagers do, swapping jokes, sharing photos and Facebook posts on their cell phones, their attention trained toward each other in natural friendship, laughing over lunch on a Saturday in the summer, not toward the parade of hate looming just outside the window.

While I was out in the quad with friends, belly full of Seacoast lobsters, teaching little girls hula-hoop tricks, and warding off my best friend’s dog from chasing down a skateboarder, the folks at American Short Fiction were working on “Marchers,” an insider’s view on the politics (and gossip) of high school marching bands and Shad Queens; the editors at Microfiction Monday went live with my short-short story, “Orderly.” Thanks to both publications (and my friends!) for a great day!

Here’s a new audio story, “Black Cats,” from the online mag, 4’33”, about an almost-true (and somewhat sinister-gone-wrong moment from my past). I’m number 96!

Eleanor Roosevelt recommends to “scare yourself at least once a day,” and tonight I heed her advice: I co-DJ my very first radio show,

an hour-long tribute to Bruce Springsteen, on my school station. The station manager, a spry straight-talker and former student of mine, walks us through the digitized recorder, the “don’t touch that button” soundboard and the “fist rule” when dealing with the hovering mics.

“There’s one catch,” she said, handing each of us rewritable CDs earlier this week. “You can’t take songs off your computer. You have to burn a CD.”

While I am a fan of Bruce Springsteen, I’m not what you’d call a seasoned diehard of the CD collecting variety. Like most of us, I surrendered my hard copy songs to the throes of the digital era and iTunes long ago. Still, I’d been proud of my efforts to bring in an hour’s worth of Springsteen songs dedicated solely to one of his recurring characters, “Mary.” I’d downloaded the songs missing from my digital vault to ensure its completeness, and subsequently discovered I had a bigger technical issue on my hands than I’d expected. My computer’s disc drive died. So I found a thumb drive, transferred the files, and brought them to my work computer, where they copied without incident onto the CD. Except the CD refused to play, first in my car and hours later on the station’s player. My co-DJ’s CD met the same fate. Mp3’s after all, are not regular CDs. Duh.

So there we were, DJs without a sound. While I am more or less a Type B kind of person—creative, go with the flow–my Type A streak tends to kick in when I encounter new endeavors. Like running a radio show. Must. Plan. Everything. So my plan to play my lovingly crafted 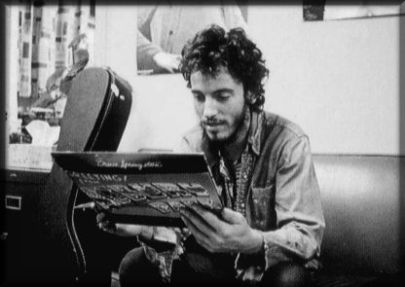 “Mary” CD with an accompanying critique of Bruce Springsteen’s Women in Nerve.com and my own personal notes on each song? Out the window. So was my partner’s solid hour of music. What now?

The station has in its digital archive a select few Springsteen songs—11, to be exact, if you count his rendition of “Santa Claus is Coming to Town,” which we did not. The Station Manager encouraged us—“fill up the air time with talk if you don’t have enough songs,” she said. “And imagine that you’re talking just to one person, not the entire town.” Over the years I’ve worked on my public speaking skills, but to speak live, unscripted, into a hovering mike with the “recording” light beaming at me sends my fight or flight soaring. Our dry run dress rehearsal—a first awkward exchange over the imagined airwaves—borders on disaster. My co-dj hits the wrong button twice. Our initial exchange is wooden, unprepared. “You mean this isn’t a practice run?” my co-DJ says. No one really listens to radio shows, anyhow, I think. Right? The Station manager tries not to roll her eyes. “Let’s try it again.”

During a song break, we chat about the theme of the show: all Bruce, All the Time. “My mother says Bruce Springsteen’s later songs are far worse than his earlier ones,” the Station Manager says. We look at her, unsure of what to say, exactly. That we plan to play, on our hour long tribute show of Bruce Springsteen, some of his less worse songs? (Speaking of, Rolling Stone just posted 100 of his less worse (read: best?) songs in the past 41 years from his 18 (!) albums.)

The recorder goes live and the Station ID plays, followed by “Spirit in the Night.” I hustle on my iPhone to dig up basic stats about the song. Co DJ introduces us, I introduce the songs, the one preceding and the one to follow—an aptly named “Radio Nowhere.” As the song rolls, we giggle and high-five. “Wow, you all were pretty nervous, huh?” We nod, still nervous. “I’ve been thinking about this for days,” I say. “Every last detail. But I think it’ll be all right.”

She looks from my co-DJ to me and back again. “Yes—this time around, you sounded much less like prep (9th graders) DJs doing this for the first time.” High praise, we decide, from such a tough critic. Or, at least praise enough to get us through an hour’s worth of a slapped together assortment of “take it or leave it” Springsteen from the vault. We share stories about each song, first concerts and visits to the actual Asbury Park. I give my take on Bruce’s underrated version (the original, I might add) of “Blinded by the Light;” my co-DJ talks about the origins and inspiration of “The Rising.” It is coming together.

“I’ve got to check in soon,” says the Station Manager. She is, after all, only 16. School’s tomorrow. “You can take it from here?” We look at each other, then her, and nod as she trots off.

We make it through the hour, scrambling, letting impulse (and some hurried backup research) guide our voices and cue the PSAs on bear sightings and childhood asthma between “Dancing in the Dark” and “Pink Cadillac.” Recordings of Barney Frank and Elmo broadcast our federally required Station Identification. So much for the carefully culled setlist. So much for the special “Mary” theme. I realize now I have lots to learn and (perhaps, like Bruce), I’m not yet ready for Mary. But next week, I will be. I hope.

At the top of the hour nears, we sigh with gratitude and play “Tenth Avenue Freeze-Out.” We mercifully manage to avoid playing the Santa Claus song. After all, this winter’s been long enough–why hang on to ancient sentiments about some frosty old guy coming to town?

It’s time to try (and play) something new.

“A chance encounter over urinal cake.”

My story “The Silent P” was published on March 8th in Litro, in the U.K. Click on the illustration to read a teaser.